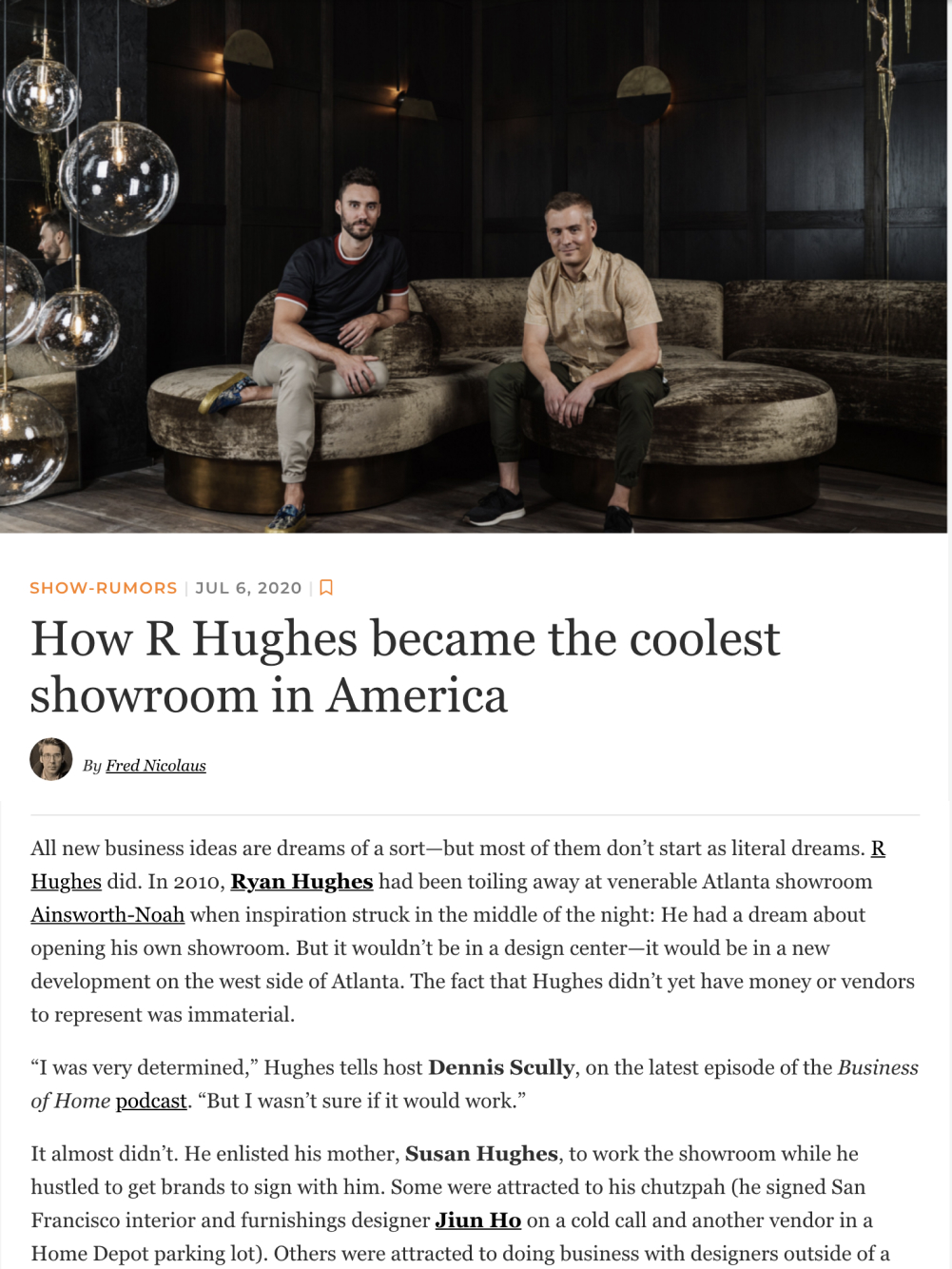 Article copied from Business of Home. You can read the original article here.

All new business ideas are dreams of a sort—but most of them don’t start as literal dreams. R Hughes did. In 2010, Ryan Hughes had been toiling away at venerable Atlanta showroom Ainsworth-Noah when inspiration struck in the middle of the night: He had a dream about opening his own showroom. But it wouldn’t be in a design center—it would be in a new development on the west side of Atlanta. The fact that Hughes didn’t yet have money or vendors to represent was immaterial.

“I was very determined,” Hughes tells host Dennis Scully, on the latest episode of the Business of Home podcast. “But I wasn’t sure if it would work.”

It almost didn’t. He enlisted his mother, Susan Hughes, to work the showroom while he hustled to get brands to sign with him. Some were attracted to his chutzpah (he signed San Francisco interior and furnishings designer Jiun Ho on a cold call and another vendor in a Home Depot parking lot). Others were attracted to doing business with designers outside of a design center. The business took shape, but it was rough going at first.

“It was a major struggle—I was six months behind in rent by 2011. I didn’t lose hope, but there were days I thought it was going to fail,” says Hughes. “I had sent Barry Dixon a package of things I thought he would like. The next morning, the developer had a meeting with me and he said, ‘Ryan, I hate to tell you this, but … this business is not working.’ Two weeks later, over $100,000 worth of orders came through from Barry Dixon’s office. I looked at my mom and said, ‘This is happening, we’re moving forward. This business is going to work.’”

Even after Dixon deus ex machina’d R Hughes back to life, there were struggles. Consistently, it was tough to get designers to make the trek to an unorthodox location; the very quality that made it compelling for cutting-edge vendors made it an inconvenience for customers. When Hughes and his business partner (and fellow University of Georgia alum) Steven Leonard signed an agreement to rep fabric house Holland & Sherry, they confronted the inevitable: It was time to move into ADAC.

Still, Hughes and Leonard were determined to break the mold and create a different kind of design center showroom. They tapped designer Smith Hanes, who has designed some of Atlanta’s buzziest restaurants, to create the look. The first thing he suggested? An old—expensive—wooden floor. “The reason I love Hanes’s work is that all of his spaces give you an experience,” says Hughes. “And I thought to myself, Why can’t a showroom give you the same experience as your favorite restaurant? It should, in my opinion.” That experiential ethos now permeates everything from the showroom’s floor to the lighting to the Spotify playlist pumping from its speakers.

With the convenience of ADAC, a fresh roster of vendors and a vibey approach, R Hughes hit its stride. Many in the Southeast, even competitors, admit that Hughes and Leonard have created a singular destination—a must-visit multiline showroom at a time when some are questioning the multiline model itself.

Of course, other showrooms have wooden floors and cool music. How to explain R Hughes’s success? Partially, says Hughes, it’s the partners’ insistence on putting their own brand first—taking their own photography, setting up their own displays and creating an allure that exists separate and apart from the strength of any one brand they represent.

“I think some multiline showrooms might become complacent, allowing the vendors to do all the work—to set their floor samples, to do all the marketing,” says Hughes. “Steven and I have a very heavy hand on the display, the marketing. We don’t just take vendor photography and e-blast it out. We try to do our own e-blasts that have our brand involved, try to do our own photo shoots. The best way I can describe it is that I believe we are true partners with our vendors. It’s more than just [hiring] a salesperson to sell the line.”

Hughes and Leonard are also firm believers in a less-is-more approach, keeping their showroom relatively sparse and changing the setup constantly—even selling pieces off of the floor (most multilines showrooms won’t), as it can help designers make tight install timelines and gives the showroom a chance to rejigger the displays.

Another secret ingredient? The partners themselves, and their relationships. “How many English arm sofas can you get from how many different showrooms in Atlanta? A lot,” says Hughes. “So you probably are going to buy that sofa from the person that you like the best,” he says. “People buy from people at the end of the day. They just do.”